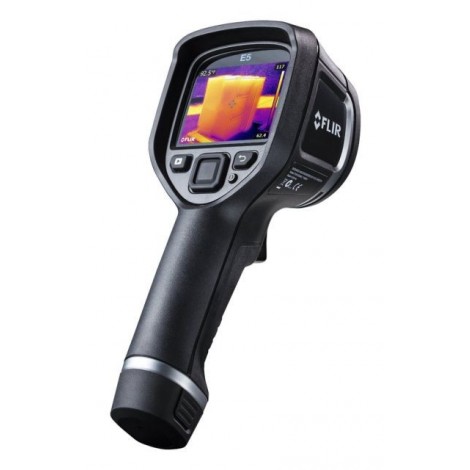 The FLIR E5-XT thermal imaging camera expands on the specification of the FLIR E4-XT with higher resolution and better levels of thermal sensitivity. With an improved resolution of 160 x 120 (19,200 pixels) and an increased thermal sensitivity of 100mK (0.1°C), the FLIR E5-XT offers increased performance at a low cost. Housed in a rugged housing, which has been drop tested to 2 metres, the E5-XT is suitable for field use in various applications, including electrical, plumbing, pest and building, as well as other applications where thermal imaging is helpful in showing hot and cold spots.

A number of helpful features on the E5-XT make the thermographers job easier, but allowing various measurement applications to be used, such as spot meter, area and different colour palettes. Additionally, various image enhancements are integrated into the E5-XT. FLIR's proprietary MSX (multi spectral dynamic imaging) feature delivers an unprecedented level of image detail, previously not available on even the most expensive thermal imaging cameras. This MSX function embeds image detail from the built in visual camera and delivers a thermal image, containing details seen in the visual spectrum, with thermal images seen in the infrared spectrum. Image blending allows the thermographer to alter the transparency of the thermal and visual images and blend them perfectly together to reveal hot and cold spot locations, in relation to what the eye can see.

The latest FLIR E5-XT model now adds WiFi enabling the user to connect the E5-XT thermal camera to a mobile device, such as a Smartphone or Tablet, running Android or iOS (Apple) operating systems. With the free FLIR Tools Mobile app, the user can view live details from the FLIR E5-XT directly on the screen of the tablet or mobile phone, which makes it useful for sharing live details with customers or colleagues, or images can be imported from the thermal imaging camera, edited and added to reports which can be emailed to customers, or perhaps fellow staff members right there from site, adding to productivity.

The FLIR E5-XT is lightweight, and easy to use, with minimal set up and user interaction required. Being focus free makes the E5-XT deliver thermal images which are free from focus problems, and the built in visual camera can also save both infrared and visual images for inclusion into reports, which can be easily created and customised using the FLIR Studio Suite software, for Windows and Mac.

EX XT Data Sheet (168.69 KB)
Similar Products
x
Price:
Actual Price:
Our price is lower than the manufacturer's "minimum advertised price." As a result, we cannot show you the price in catalog or the product page.