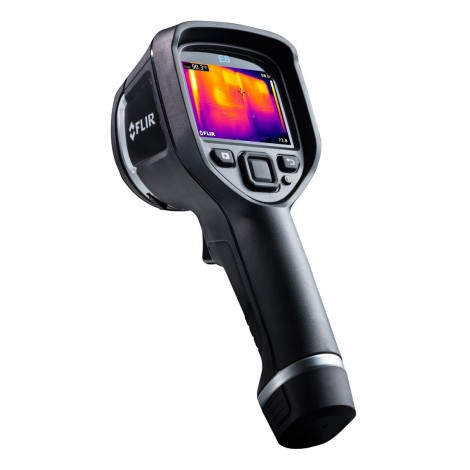 Offering an easy to use and very well-constructed device, the FLIR E8 is both ergonomic (in our opinion) and user friendly, with all the controls well positioned and a very uncluttered interface with a central control button and four way keypad to navigate around the menus. Addition to this, the housing is a hard wearing design, which has been drop tested to withstand a fall of up to 2 metres, according the manufacturer. Whist we didn’t drop a unit ourselves, we didn’t have any reason to question the manufacturer’s claims.

The FLIR E8 is focus free, which means that it is a case of point, shoot and capture plus the built in digital camera also captures a visual image at the same time as the thermal image and pairs them together – no more using a separate camera and trying to pair the correct images together, just a single pull of the trigger and it’s done.

While the build quality and ease of use of the FLIR E8 are undeniably excellent, the main thing that really sets it apart from other cameras in this price range is the infrared resolution. At 320 x 240 pixels, this gives a very respectable 76,800 data points in each thermal image, which is four times more than the FLIR E6, and the FLIR E40 which both have 160 x 120 resolution (19,200 pixels), although the FLIR E40 also has a much smaller field of view than the FLIR E8, so the absolute pixel size will be comparable.

The images below show the same electrical panel, taken with different resolutions (both with MSX image enhancement enabled. The image on the left is taken with the lower resolution E4 and the image on the right with the FLIR E8. It is also apparent that the image from the E8 is smoother, due to the better thermal sensitivity: 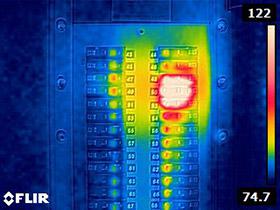 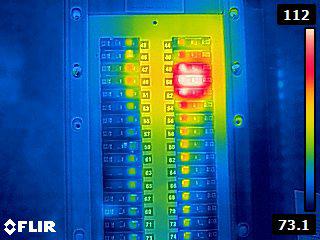 FLIR have fitted the E8 with a wider angle 45 degree lens, which offers a greater field of view than the FLIR E40, FLIR E50 and FLIR E60. Essentially, this wider angle lens means that a larger area can be scanned and less IR images taken of that area. This speeds up the time taken to image the same area that can be scanned with a thermal imaging camera having a narrower field lens. The narrow field lens, such as those found on the FLIR E40, E50 and E60 will translate to smaller pixels, which is useful for closer up detailed work, but the wider angle lens found on the FLIR E8 is useful for thermal imaging in restricted spaces, such as buildings, switchboards where more equipment needs to be imaged and it may not be possible to back up enough.

Take the two images below, both taken with exactly the same resolution, (not with the FLIR E8) but the image on the right has double the amount of thermal sensitivity, which makes the image clearer. Again, this will make identification of small temperature differences easier:

Like all FLIR Thermal Imaging Cameras, the FLIR E8 offers FLIR’s proprietary MSX imaging technology (MSX is short for multi spectral dynamic imaging) which improves image detail by taking the detail seen in the visual image and applying the edges and details to the thermal image, giving a much greater level of image clarity, previously not available in infrared images. This can be seen in the above images of the phone and printer. On the left image it is thermal only, and MSX is enabled on the right hand image. With MSX, details appear in the infrared images, which can be easily correlated to the location of the problem area as seen with the naked eye, making identification of problem components and defects much easier than with a standard thermal image. 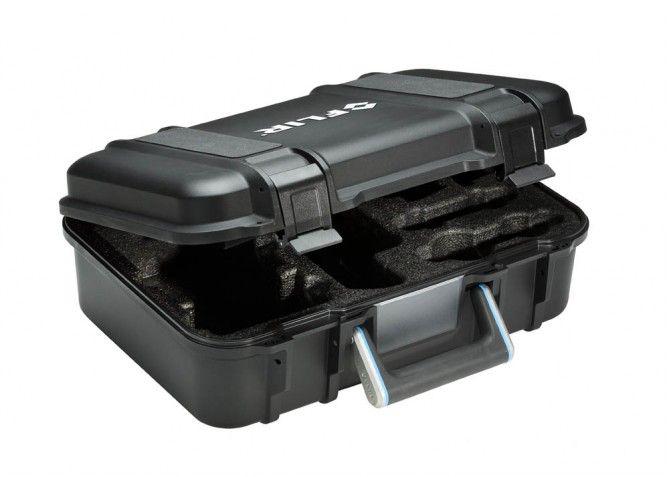 The FLIR E8 is supplied in a nice kit all set out in a hard field case with more than enough cushioning and support and rather than just the one rechargeable battery, the E8 is supplied with 2 batteries and a desktop charger, which allows one battery to be ready for use at all times.

The FLIR Tools software which is supplied with all FLIR Thermal Imaging Cameras, including the E8 makes downloading images, analyzing them and creating customized, professional looking reports simple and quick. Unlike quite a number of software programs supplied with test instruments, the FLIR Tools software will work with both Windows and Apple platforms, and it is designed to be easy to use as well as functional, plus it can be installed on multiple computers.

For customers who want add on lenses and WiFi connectivity, the FLIR E8 won’t be able to do it. To do that, the FLIR Exx Series and FLIR T Series are the thermal cameras of choice, but for uncomplicated point and shoot thermal imaging, with professional level resolution, the FLIR E8 would represent an excellent value for money choice, and backed by FLIR’s 10 year detector warranty, it’s a safe investment.

For more information on the FLIR E8, please go to:

Disclaimer: Images are used for illustrative purposes only.

The FLIR E8-XT thermal imaging infrared camera is the flagship model of the FLIR Ex-Series. Boasting a 320 x 240 infrared resolution (76,800 pixels), the FLIR E8-XT delivers almost twice more resolution than the FLIR E6-XT, four times more than the E5-XT and sixteen times more pixels than the FLIR E4-XT. Couple this high level resolution with the FLIR MSX (multi-spectral dynamic imaging) feature, and the E8-XT becomes a very powerful tool for thermal imaging of smaller areas of temperature difference, with finer details available to the thermographer.

As with the other thermal imagers in the FLIR Ex-Series, the E8-XT is a lightweight, point and shoot infrared camera with a multitude of features, deigned to make using the device easy, while delivering professional quality results time after time. Being focus free enables the FLIR E8-XT to take crisp, clear thermal images with very little user intervention, and the built in memory allows the FLIR E8-XT to store up to approximately 500 sets of images, which can be downloaded to a PC (Windows or Mac) via the supplied USB cable and analysed or manipulated with the supplied FLIR Tools software. Creating customised reports can be achieved with relative ease for sending to clients. The built in visual camera, and MSX allows for enhanced thermal image quality with greater levels of detail in each infrared image.

A number of measurement tools can also be used with the E8-XT, for example a spot meter, or a box with automatic hot or cold spot recognition, and isotherm analysis of temperature differences. Thermal blending is a function found on the FLIR Ex-Series, which overlays the thermal and visual image and permits the transparency to be altered for exact identification of problem areas. The enhanced 60mK (0.06°C) thermal sensitivity not only allows for finer temperature differences to be identified, but also enhances images with lower thermal contrast, making the FLIR E8-XT suitable for building and pest work, as well as veterinary applications, and other applications requiring higher resolution thermal imaging.

EX XT Data Sheet (168.69 KB)
Similar Products
x
Price:
Actual Price:
Our price is lower than the manufacturer's "minimum advertised price." As a result, we cannot show you the price in catalog or the product page.