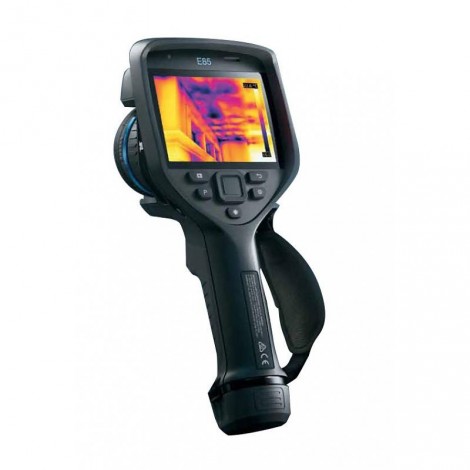 The new FLIR E85 Thermal Imaging Camera builds further on the specification of the FLIR E75 and still combines all of the latest technology available from FLIR Systems and puts it into a completely redesigned thermal imager. With the E85, FLIR has completely re-engineered the popular Exx Series infrared cameras and puts all their know how into a brilliant new series of thermal imaging cameras, which have been designed to offer the best performance, sensitivity and resolution of any pistol grip thermal imaging camera on the market.

The FLIR E75, E85 and E95 are packed with a host of features which make troubleshooting of electrical and power systems and mechanical systems quick and easy, avoiding costly equipment failures. For building and pest inspections, the FLIR E85 allows you to find moisture problems, identify leaks and inspect insulation and building problems due to the industry leading sensitivity and resolution.

A new, larger and brighter touchscreen provides the user with control of the E85's menu settings in an intuitive navigation system, complete with multi-touch gestures support which has the sensitivity of a smartphone or a tablet. The screen is made of tough Dragontail® glass and the entire thermal imaging camera is housed in a new rubberised dust and water resistant housing, offering further protection from our harsh Australian environment.

The FLIR E85 produces a crisp and clear image, thanks to it's 384 x 288 infrared resolution. Previously this resolution of thermal imaging camera would have cost significantly more than now, but due to advances in technology and FLIR's commitment to staying at the forefront of thermal imaging equipment, it is now possible to obtain this sort of resolution and performance at a price which could only have been imagined, even in recent times. With an amazing thermal sensitivity of only 0.03°C, the image provided by the FLIR E85 looks clean and smooth, even when working in areas where temperature differences are small, or from a distance. This resolution is higher than the resolution found in even the FLIR T420, 440 or 460.

In order to enhance the thermal image, the E85 boasts TWO of FLIR's proprietary imaging tools. MSX is a FLIR patented system which uses the integrated visual camera to identify edges and patterns, and adding them in real time to the thermal image. MSX images contain all the necessary temperature information and thermal patterns, but with visual detail and references. UltraMax is another FLIR enhancement boasted by the E75, E85 and E95 thermal imaging cameras. When used, this super-resolution technology captures 16 thermal images with one single press of the image capture button. Very slight, natural hand movement means that each image will be slightly different and many more data points will be captured. When each image is downloaded to the FLIR Tools software program, the 16 images are combined into a single image, but with up to 4 times as many pixels as a standard thermal image, giving the E85 a 768 x 576 (442,368 pixels) thermal image.

Laser assisted auto focus continues the FLIR mission with the E85 to make capturing great thermal images quick and easy. A built in laser distance meter makes certain that the lens is correctly set each time the auto focus button is pressed. A manual focus ring is also provided for users who may prefer to manually focus the E85, or who may be upgrading from the FLIR E30, E40, E50 or E60 and be used to manual focus, but laser focus is fast and accurate, and as an additional bonus also provides distance to target information, which provides data needed to measure an area (m2 or ft2) of a temperature anomaly - perhaps missing insulation, moisture damage, pest damage or other faults right there on the screen. In continuous focus mode, the laser assisted technology responds instantly to movement, maintaining focus, even in cluttered surroundings and giving a clear view from even wide angles.

FLIR have paid an extreme amount of attention to the design and functionality of the E85, adding on a plethora of features which will ensure that this camera is positioned squarely at the cutting edge of modern thermal imaging technology. Attention to detail, such as moving the visual camera lens closer to the thermal image camera lens, upgrading the visual camera to a new 5MP shooter, and adding a built in microphone for voice annotation without the need for a cumbersome headset are all features which add to the overall user experience.

Wireless communication has always been a FLIR forté, and with the new FLIR E85, this has not changed, with the latest communication interfaces being available such as WiFi and Bluetooth. Wifi allows a smartphone or tablet, running the free FLIR Tools Mobile app to be connected to the E85. This app allows the user to view the thermal imaging camera screen in real time on a mobile device, images can also be captured and uploaded to cloud services, and a report can be created and emailed from the field there and then, aiding productivity and perceived professionalism. Bluetooth allows FLIR MeterLink to work, which connects the FLIR E85 to any MeterLink equipped FLIR clamp meter, multimeter or moisture meter. All data from the connected meter can be captured and and stored with the thermal image, and the built in compass and GPS means that knowing where the image was taken is simple to look up.

Thousands of image pairs (thermal and visual) can be stored on the on-board SD card, and now the FLIR E85 allows thermal video with full radiometric data for every pixel in the image to be recorded. In addition to this, FLIR have also completely overhauled the memory structure with the E85. Previously image were stored with a number, but now the new memory structure allows media to be organised into a folder structure of your choice, whether by customer, location, or another parameter. Voice and text notes can be annotated to each image, and downloading to a PC or Mac can be accomplished by either connecting the supplied USB cable, wirelessly to a tablet or smartphone, or by inserting the SD card into a computer. The FLIR Tools software which is supplied as standard offers a powerful solution to image analysis and reporting. Various colour palettes are available, as are a number of image measurement tools, such as centre spot (up to 3 spots in live mode), automatic hot and cold spot, and the user can even define a temperature threshold and show everything above or below in different colours, which makes detection of electrical and mechanical faults, as well as building, moisture and pest problems far easier. 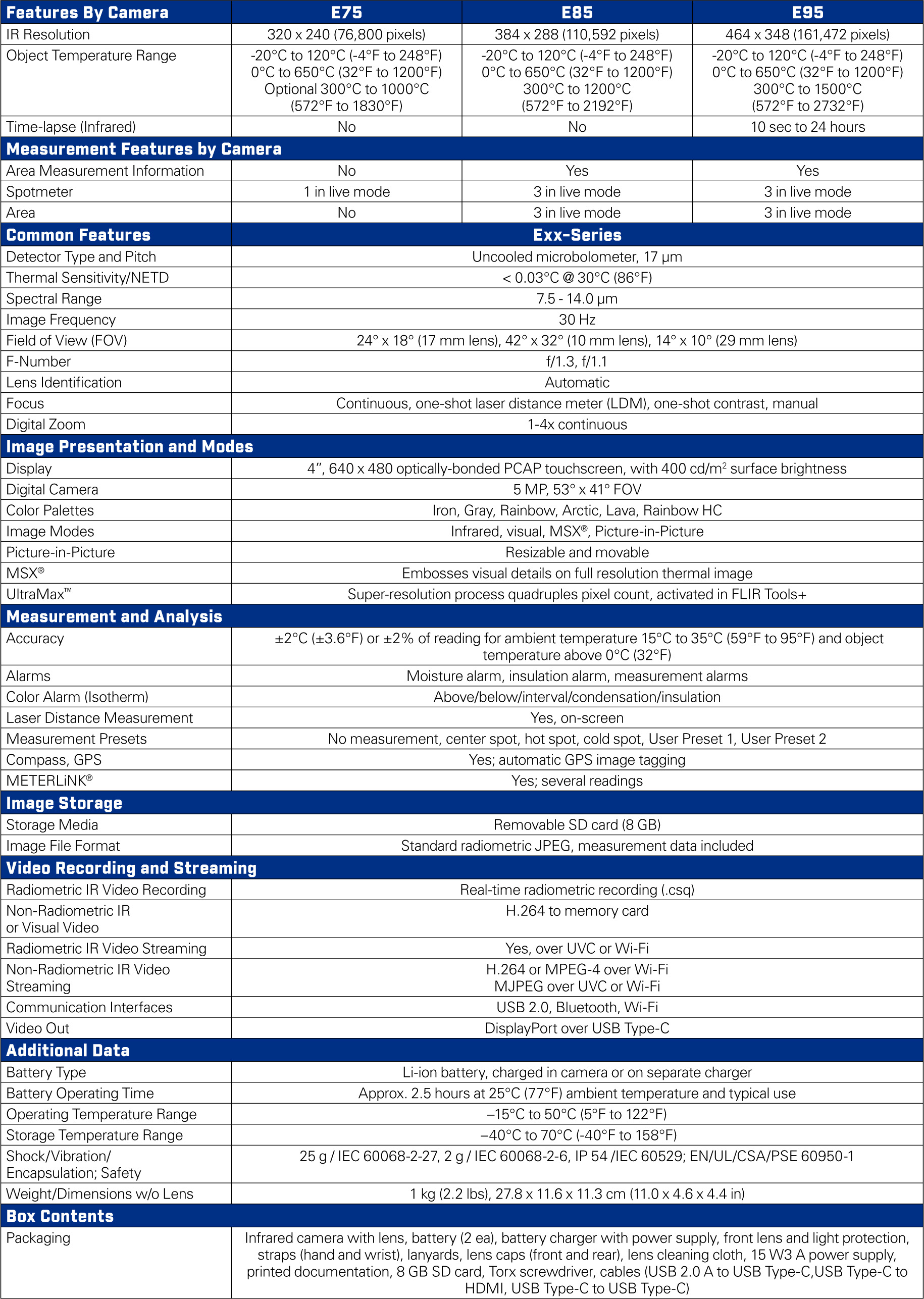 Disclaimer: Images are used for illustrative purposes only. Specifications are subject to change without prior notice.