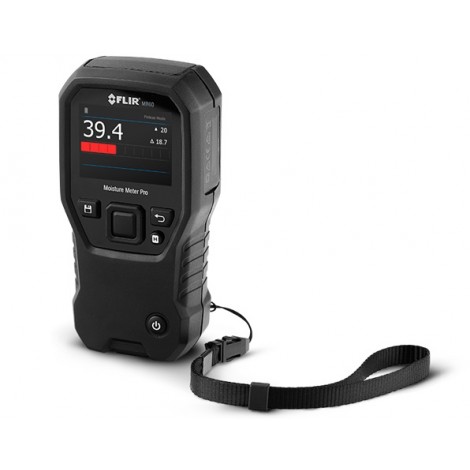 The FLIR MR60 Moisture Meter pro is an advanced, pin and pin less moisture meter, which can be used to locate moisture content in a variety of materials. Offering both pin and pin less methods of measurement, the MR60 can either be operated by attaching the external pin probe and selecting one of the 11 installed material groups, or for non-destructive moisture testing, the MR60 can be used as a pin less moisture meter, which provides the flexibility of non-destructive moisture scanning, by setting a reference point and taking fast and easy comparative moisture readings.

While taking measurements, you can save screenshots of your measurements as a CSV file containing the date, time and settings. The MR60 can save up to 10,000 screen shots which can easily be transferred and viewed via USB or PC and the FLIR MR60 can generate reports with the  FLIR Studio Suite™ software.

The MR60 offers a bright, colour screen and an intuitive menu interface with selectable languages, allowing the user to customise the functionality of the moisture meter, via it's graphical interface, such as setting alarm limits, with colour visual alarms as well as audible alarms to alert you to high moisture levels.

The integrated pin less moisture sensor makes using the FLIR MR60 simple and requires no training to do so. In cases where a pin type moisture reading is required, such as confirmation of the moisture content by weight, you simply connect the external pin sensor to the MR60, select one of the 11 material groups and take the measurement. Confirming the presence of moisture is simply a case of setting a reference point in a known moisture free area, and scanning the material, looking for an increase in the reading.

Like all FLIR test and measurement equipment, the MR60 is designed around a robust construction, and a simple to use menu system with clear, graphical icons. The FLIR range of moisture meters are aimed at giving professional and home users many years of reliable operation.