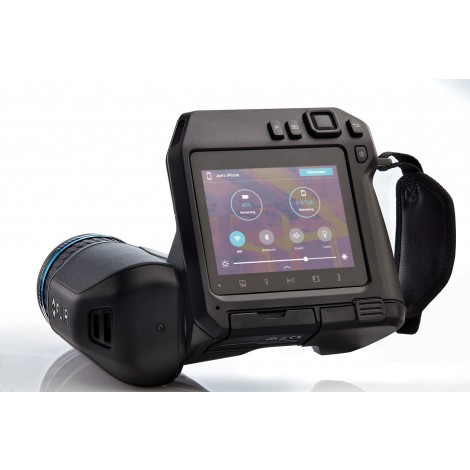 The FLIR T540 Thermal Imaging Camera offers a best in class thermal resolution and is aimed at professional users in need of all of the latest FLIR technologies. With a 464 x 348 infrared resolution and a thermal sensitivity of just 0.03 °C, this level of performance sets a new level of expectation in thermal inspections, allowing even small and subtle temperature differences to be highlighted. Suitable for use in a wide range of applications, including electrical, mechanical, building, pest, and many other industries.

FLIR have completely redesigned the T540 and added a host of new features, which enable the T540 to capture high quality thermal images easily, giving professional results with minimal effort. With 161,472 pixels in the field of view, which is more than double the amount of pixels found in a 320 x 240 thermal imaging camera, the T540 produces an excellent quality thermal image in real time view, on the thermal imaging camera's screen, as well as in thermal reports. The new Dragontail™ touchscreen offers a larger 4 inch screen, which is up to 33% brighter than the previous screens and offers a wide 160 degree viewing surface, allowing both customers and colleagues to view the on screen thermal image. The Dragontail™ glass is extremely resistant to damage and cracking, and the new capacitive touchscreen improves the sensitivity to touch. FLIR have also added multi-touch gestures to the screen on the T540, making the use experience mirror that of a smartphone or tablet, such as swiping down to access shortcuts, and pinching to zoom in or out. Auto-orientation will ensure that the measurement data and menus are the correct way up, regardless of whether the T540 is held horizontally or vertically.

With excellent sensitivity, the FLIR T540 gives you the ability to visualise even very tiny temperature differences. This makes for more subtle patterns in the image, with a better understanding of how temperature is changing across a target. The FLIR T540 infrared camera can view and measure temperatures from -20 to 15000 °C (-4 to 2732 °F). The 180° rotating optical block can be aimed straight up to straight down or anywhere in between to achieve the best image, as well as reduce fatigue often associated with pistol grip thermal imaging cameras.

In order to further enhance the thermal image captured by the T540, FLIR have added TWO of their proprietary imaging tools. MSX is a FLIR patented system which uses the integrated visual camera to identify edges and patterns, and adding them in real time to the thermal image. MSX images contain all the necessary temperature information and thermal patterns, but with visual detail and references. UltraMax™ is another FLIR enhancement boasted by the T540 thermal imaging camera. When used, this super-resolution technology unknowingly captures 16 thermal images with one single press of the image capture button. Very slight, natural hand movement means that each image will be slightly different and many more data points will be captured. When each image is downloaded to the FLIR Tools software program, the 16 images are combined into a single image, but with up to 4 times as many pixels as a standard thermal image, giving the T540 a huge 928 x 696 thermal image, with a huge 645,888 pixles.

One of the newest features included on the FLIR T540 is laser guided autofocus. A laser distance meter is built into the T540 which is activated by a separate button just above the capture button. The T540 thermal camera uses this distance information to quickly and precisely adjust the focus. The autofocus can be continuously active, or performed on demand. A manual focus is also included for when the target area is complex and a particular focus is desired. The laser distance meter also enables the FLIR T540 to calculate surface area. Simply use the touchscreen to draw a box over the image, and the camera will automatically calculate the area in square meters or square feet. You can measure are in up to three boxes at once, and these measurements are stored with any captured image.

FLIR have refined the communication options for the T540, and as a result of that, the thermal imaging camera can now be connected to phones, tablets, a PC and even a TV monitor. Wireless communication has always been a strong point of FLIR thermal imaging cameras, and with the new FLIR T540, it has been improved yet again, with the latest communication interfaces being available such as WiFi and Bluetooth. Wifi allows a smartphone or tablet, running the free FLIR Tools Mobile app to be connected to the T540. This app allows the user to view the thermal imaging camera screen in real time on a mobile device, images can also be captured and uploaded to cloud services, and a report can be created and emailed from the field there and then, aiding productivity and perceived professionalism. Bluetooth allows FLIR MeterLink to work, which connects the FLIR T540 to any MeterLink equipped FLIR clamp meter, multimeter or moisture meter. All data from the connected meter can be captured and stored with the thermal image, and the built-in compass and GPS means that knowing where the image was taken is simple to look up.

Thousands of image pairs (thermal and visual) can be stored on the on-board SD card, and now the FLIR T540 allows thermal video with full radiometric data for every pixel in the image to be recorded. In addition to this, FLIR have also completely overhauled the memory structure with the T540. Previously images were stored with a number, but now the new memory structure allows media to be organised into a folder structure of your choice, whether by customer, location, or another parameter. Voice and text notes can be easily annotated to each image as well as on screen sketching, and downloading to a PC or Mac can be accomplished by either connecting the supplied USB cable, wirelessly to a tablet or smartphone, or by inserting the SD card into a computer.

The FLIR Tools software which is supplied as standard offers a powerful solution to image analysis and reporting. Various colour palettes are available, as are a number of image measurement tools, such as centre spot, automatic hot and cold spot, and the user can even define a temperature threshold and show everything above or below in different colours, which makes detection of electrical and mechanical faults, as well as building, moisture and pest problems far easier.

To make the most of the temperature measurement capabilities of the FLIR T540 thermal imaging camera, you can set up to three spot meters and area boxes on screen, along with automatic hot and cold spot detection. Colour alarms can be set to visualize areas above, below, or between a user set threshold and available colour palettes include all the most popular FLIR palettes, including Iron, Gray, Rainbow, Arctic, Lava, and Rainbow HC. Two programmable buttons make it easy to toggle between frequently used settings, or between image and video capture, or many more available shortcuts.