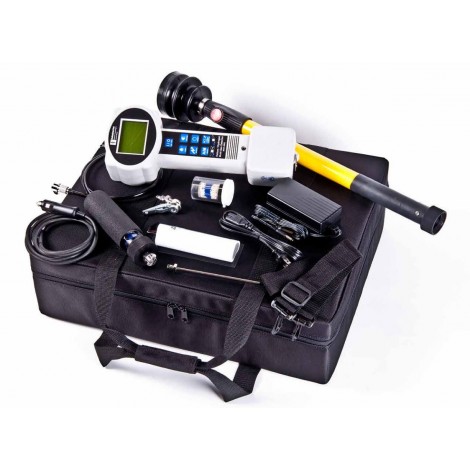 The MGD-2002 gas detector is used for leak detection in pressurised system using the tracer gas method. Both hydrogen and helium can be used as a tracer gas, as they are both lighter than air enabling them to penetrate small leakage points rapidly. These gases can pass through the densest soils and pavements quickly, enabling the leak to be pinpointed easily with the detector. The MGD-2002 is a portable device and is supplied as a kit ready for field use. With detection capabilities as low as 25PPM, the MGD-2002 can detect even small leaks in buried pipes and cavities.

Leak detection is possible in a range of underground pipes, tanks, cables, and cavities in automatic or manual modes and the MGD-2002 works equally well with helium or a hydrogen / nitrogen mix tracer gas. Because of the sensitivity of the MGD leak detector, helium can be mixed with ambient air in larger volume systems in order to reduce the cost of use. Because helium is non-polluting, non-reacting and safe to use, it makes it the ideal tracer gas to use in critical systems.

A rechargeable Ni-MH battery allows up to 8 hours of use per charge, and the MGD-2002 can be recharged with either the mains adpater or automotive adaptors included in the kit, and with only a 30 second power on and self test, the MGD-2002 is ready for use as quickly as you need it to be.

In order to locate a leak with the MGD-2002, the system is emptied and then pressurised with tracer gas. A ground probe is used to locate and pinpoint the leak by placing it's rubber cup on the ground over the system and reading the results on the digital display. Tracer gas will rise to the surface over a period of time (depending on the material and conditions) and can pass through soil, clay, concrete and pavement, enabling the position of the leak to be located and pinpointed.

MGD 2002 Data Sheet (256.31 KB)
x
Price:
Actual Price:
Our price is lower than the manufacturer's "minimum advertised price." As a result, we cannot show you the price in catalog or the product page.