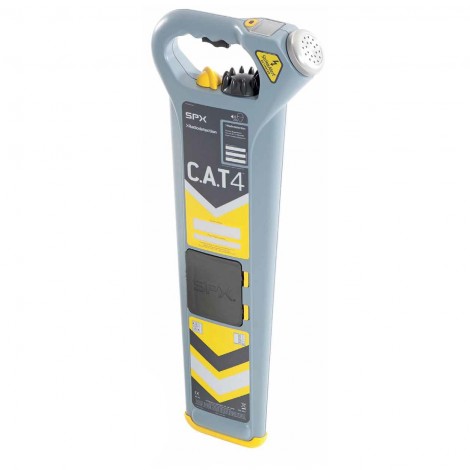 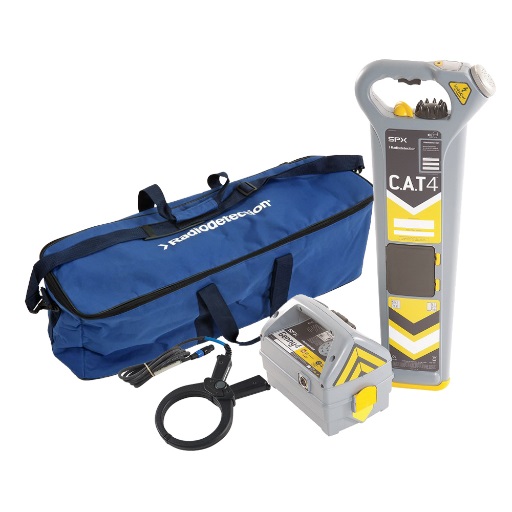 The C.A.T4 + kit is supplied in a professional looking carry bag, which has more than enough room to fit all the components in it, and it is divided into useful compartments, which can be changed around if the desire takes you because the dividers inside the bag have Velcro to hold them securely in place, but they can also be quickly and easily removed.

The build quality of the locator, transmitter and the clamp are in all honesty, excellent. They are made from a tough ABS construction which looks as though it would be at home on any construction site, and being an IP54 rated instrument, it is both dust protected and splash proof, meaning that it should be  able to be used outdoors in the rain. Both the locator and the transmitter feel robust and weighty enough to feel like high quality equipment.

The locator feels ergonomic and well balanced in the hand. For users with longer legs it is still comfortable to use for extended periods of time, and the controls are simple and very easy to operate, all being placed within easy reach. The locate modes are selectable from a large rotary dial, positioned at the bottom of the handle, so can be selected with one hand, whilst holding the locator with the same hand, and the gain, or sensitivity is also easily selectable with the locator in use which makes performing locates easy, as the operator can simply turn the level of gain up and down for fast pinpointing of locate signals. The screen is easy to read and surprisingly uncluttered, with only a bar graph, signal strength and mode of operation visible. By pressing a small yellow button which is located just underneath the screen, a depth reading is possible. We hooked the Radiodetection C.A.T4 + up to a power cable using the induction method by means of the included signal clamp and walked across a car park, tracing the signal as we went. Pressing the depth button indicated a depth of 450mm for the mains cable, which when checked was found to be a very accurate indication. However, it is worth bearing in mind that the depth reading is dependent on a good quality signal and does not work as well for very weak signals, or for scenarios where the locator is not oriented correctly, but that all comes with experience and some trial and error.

Just like the locator, the Radiodetection transmitter, which is provided with the C.A.T4 + kit has the same robust build quality. One of the best features of the transmitter, or genny (short for signal generator) is the built in tool tray, which is clipped onto the bottom of the unit, with two fast release clips on the sides. This tool tray nicely houses the direct connection lead set, and the earth stake and accessories, which are used to apply a locate signal to an underground cable or pipe, or even a buried data or telephone cable. The transmitter itself is a 0.1 watt device, but it does have a signal boost on it, which can be activated by the press of a dedicated button, and this will increase the locate signal by a factor of ten, up to 1 watt. Whist this is not as powerful as the transmitters which are found with the Radiodetection RD7100 and RD8100 underground utilities locators, it was still found to be sufficient for general underground cable and pipe locating, and should in decent conditions be able to apply a locate signal for a very respectable distance. 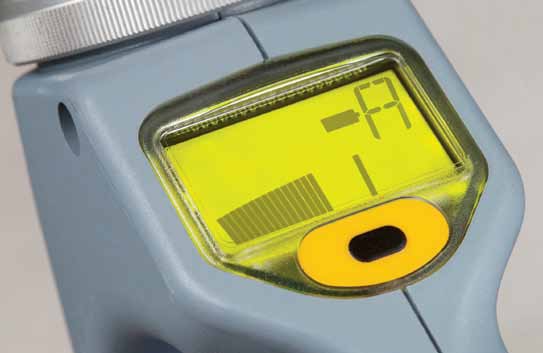 The C.A.T4 + locator can use both active and passive modes of locating. A passive mode is one that does not involve a locate signal being purposely applied to an underground utility and in the case of the C.A.T4 +, this is power mode (which is used to locate a live cable), or radio mode (which is used to locate buried utilities from the presence of long range radio signals, which use the metallic cables and pipes to travel through the ground) and avoidance mode (which is a mixture of all modes). In active mode, the operator needs to apply a locate signal from the genny, which can be done in three ways – direct connection mode (which involves connecting the leads to the cable, pipe or infrastructure), the induction clamp (which simply clamps over the target line, so no contact with any potential live cables) or wireless induction (which just involves placing the genny on the ground above the target line and allowing the locate signal to couple through the soil). Each method has it’s benefits and short-comings, for example direct connection travels further, but must be physically connected to the target line, using the induction clamp is easier, but only works well on grounded infrastructure (usually no problem for most cables) and wireless induction is fast and easy, but the signal does not travel as far as the other two methods.

Either way, the C.A.T4 + is still versatile enough for most general locates and if you are looking at scanning an area and finding buried infrastructure without the added features of the more expensive RD7100 and RD8100, then the C.A.T4 + would make a very good addition. It offers extremely good value for money in kit form, with a signal clamp, transmitter, locator, leads, manuals, carry bag and calibration certificate all supplied as standard.

One of the best and most useful features, which Radiodetection have put in most of their underground utilities locators (including the C.A.T4 +) is something called e-Cert. This eliminates one of the biggest inconveniences in owning an underground locator – sending it away for calibration. With e-Cert, re-calibration is fast, simple and far cheaper. A software program, called C.A.T Manager is supplied with every C.A.T4 + kit and a USB cable. When the calibration is due, all you do is open the program (you need to purchase a credit, which is currently just over $100) and connect the locator to a PC. Follow the instructions and it’s done in no time at all. The option is there to save and/or print the new calibration certificate. This is really one of the things that sets out Radiodetection as a standout brand. 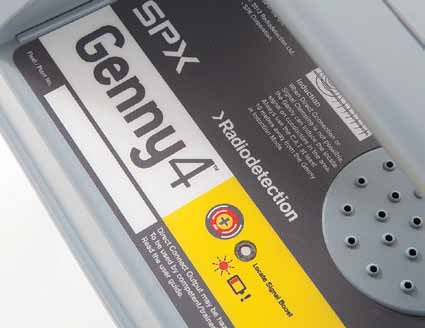 Overall, there really is not that much to dislike about the Radiodetection C.A.T4 +. It is a functional underground utilities locator, which Radiodection brand it as a cable avoidance tool, and that is it’s primary function. It will also aid in locating metallic pipes, telephone and data cables. Conduits and plastic pipes can be located, but to do this, you need to use a sonde (or mouse) which is a small battery powered locator beacon which sits on the end of either a powered reel or a duct rod.

The simplicity, ease of use and robustness of the C.A.T4 + are it’s major selling points. The e-Cert is a big selling point and the fact that even inexperienced users are able to operate it without any real product training will be a big bonus for other customers. For a straightforward, value for money, easy to use general underground locator, the C.A.T4 + would be a difficult one to beat. For very precise locates in very congested areas, a multiple frequency machine like the RD7100 or RD8100 might be a better bet, at a much higher price tag, or the RD2000 as a compromise.

PLEASE NOTE THAT THIS REVIEW IS BASED ON THE C.A.T4+ KIT. THE PRODUCT ON THIS PAGE IS THE RECEIVER ONLY. THE KIT IS LISTED HERE

The Radiodetection CAT4 proprietary StrikeAlert™ warning, warns of shallow buried utilities. The CAT4 guides users towards better and safer working practices through its Service Due date warning. CAT4 is a safety-critical precision instrument and the optional 30-day countdown to the Service Due date, CALSafe™ and innovative eCert™ on-line system calibration validation capabilities are designed to reinforce company and recommended service policies

Avoidance Mode - for rapid scanning and locating, simultaneously searching for power, radio and Genny signals all at the same time.

Genny Mode - Detects the signals transmitted by the Genny4, with on demand estimation of the depth of buried services (direct coupling and inductive mode)

Simultaneous dual frequency and simple locating methods assist CAT4 and Genny4 users to locate Small Diameter cable such as telecom twisted pairs, CATV feeds, spurs and drop-offs which have historically been hard to find and are a common strike risk

Radiodetection’s unique digital signal processing capabilities equips the C.A.T4 with the ability to reject electrical interference. Dynamic Overload Protection gives CAT4 series products the ability to continue operating in electrically challenging areas, such as near substations and under power cables, where other locators’ detection circuitry may be overloaded and no longer function.

Using the eCert™ technology, the CAT4 underground cable and pipe locator can be easily calibrated at a fraction the cost of other locators without even sending it to a service facility. Using an internet connection, the eCert™ will provide an assessment of the unit's hardware and software using a link via a PC, and can be used to extend the validity of the calibration certificate on demand, with no downtime. The user can print or save a calibration certificate for their locator. A complete service backup is also provided here.

The Genny4 offers, alongside its standard power mode, a Signal Boost feature which increases the output signal by up to 10 times allowing you to locate over extra distance and depth.

The CAT4’s high visibility display helps to minimise the possibility of misreading critical information from the unit. The high contrast and automatic backlight illumination provide optimum visibility in all light conditions.

The CAT4 is a simple to use underground cable and services locator with features designed to make the operator's job as easy as possible. All CAT4's are reverse compatible with Genny3 accessories. 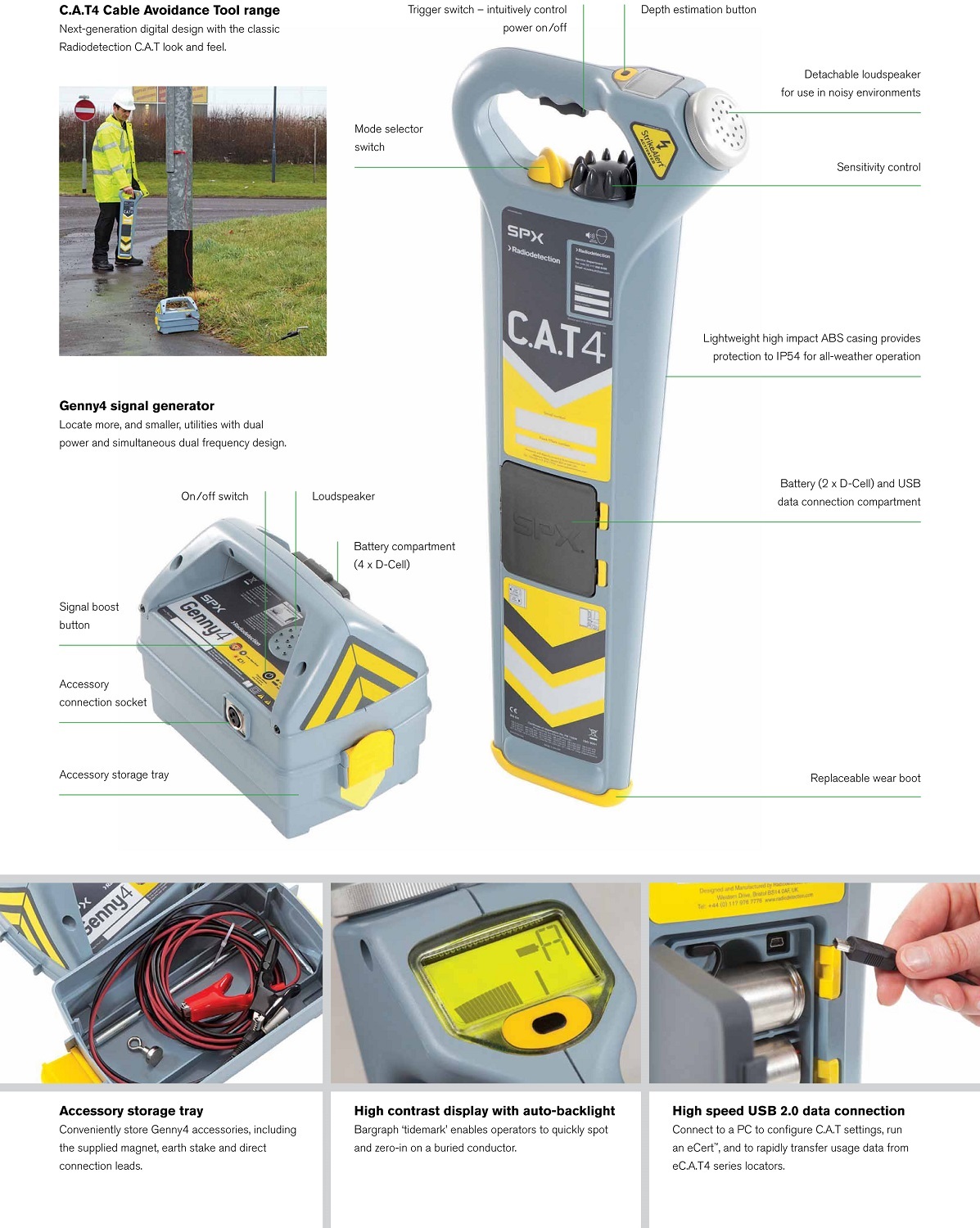 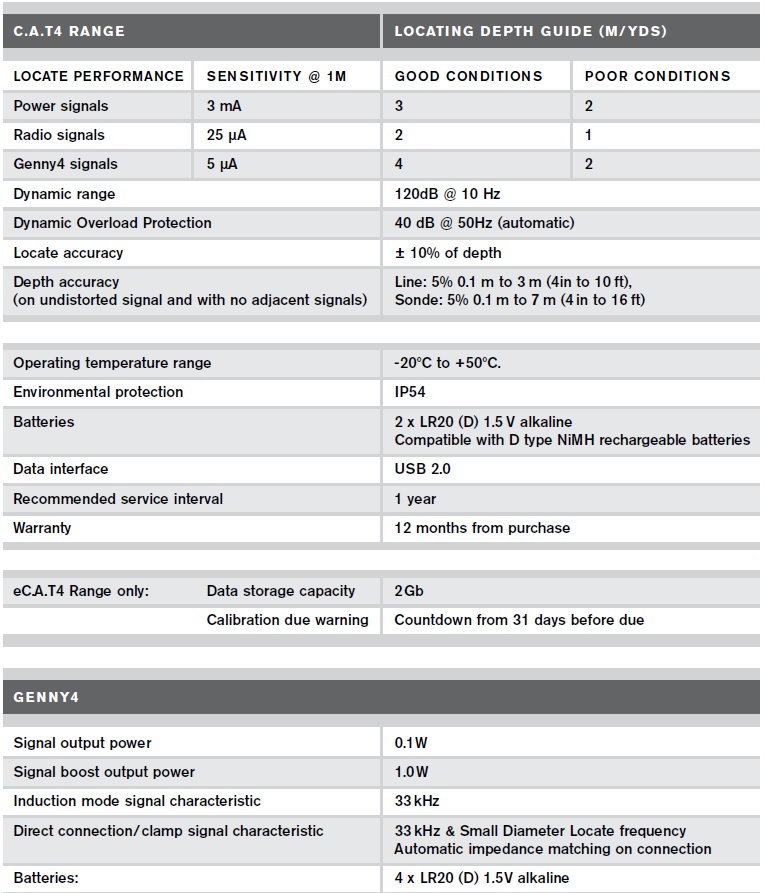 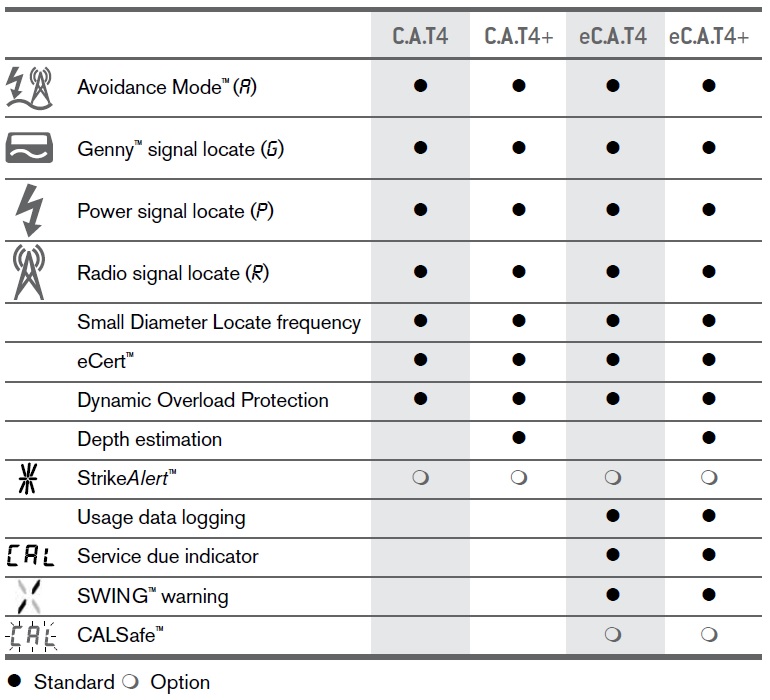