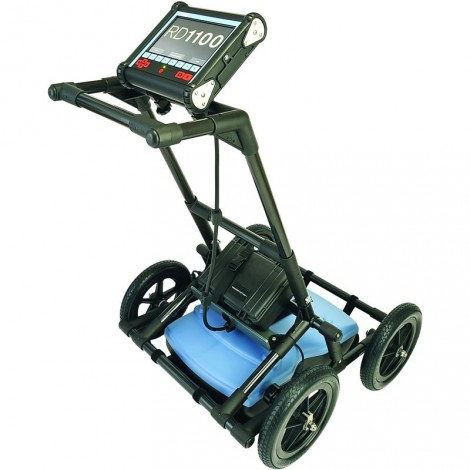 The RD1100 from Radiodetection enables the location of both metallic cables, pipes and other structures, but also non-conductive pipes, ducts and utilities, such as plastic pipes and structures constructed from non-metallic materials, which would otherwise require tracer wire or sondes to detect with a tradtional cable and pipe locator, which gives ground penetrating radar a wider application base than tradtional locators. The RD1100 may also detect the position of multiple services and utilities in relation to each other with a single pass. Featuring an advanced ultra wide band radar sensor, centred on a 250MHz frequency, which helps to eliminate the need for multiple sensors, and powerful digital imaging processing, the RD1100 can detect buried infrastructure and services at depths of up to 8 metres.

Additionally, the RD1100 allows the operator to locate and mark buried utilities in a single pass. Once a utility or buried object is detected, the operator simply has to just reverse the RD1100 in order to switch it into locate mode and determine the buried utility's depth and position. To do this, the RD1100 is rolled back along the same path until the red position indicator line is exactly over the response on the screen. The user simply drags the depth indicator up or down to the desired location to display it's depth value on the screen. To get the position and depth information about a different point on the screen, which is common where buried infrastructure is highly congested, simply touch and hold that point for a second, and a cross hair and location information will appear on the screen. Screenhots can easily be captured with a simple button press, which captures the line view on the screen, including GPS data and any marker arrows and flags, which may have been added by the user.

A number of new features have been added to the RD1100 ground penetrating radar to enhance productivity and user experience. Internal Wi-Fi and USB for data transfer are now included in the system, which allows the user to email mini reports, containing screenshots and tabulated data with information about the locate to clients or colleagues using either a wireless network, or a smartphone which can be used as a wireless hotspot. Screenshot images can also be exported from the RD1100 to a USB drive for transfer to a PC, cloud storage or a shared drive. Internal GPS is included as standard on the RD1100 GPRS, which gives the ability to geotag screenshots and genrate a .kmz file, which can be opened in Google Earth to show the geographic location of the screenshots.

The touchscreen contains a high resolution display, which also provides the user with the ability to draw arrows on the screen to highlight any features, which may be of interest, and soil calibrations can also be performed on the display, simply by dragging a Soil Cal Hyberbola across the screen, so that it lies over a response hyberbola from the ground, and matching the shape. The user is also able to utilise a number of colour palettes, for optimising the colours to match the locate for the best level of detail.

The RD1100 is contained in a non-metallic cart, built of easy handling over different types of terrain, and can be comfortably used for longer site surveys. A new high resolution touch screen provides the operator with simple and intuitive access to all the features of the RD1100, and with a simple image capture to assist in documenting locates and site surveys, the RD1100 has both USB and Wi-Fi to allow the captured screenshots with associated data to be easily exported to a PC, tablet or even a smartphone, in order to be included in survey reports.

Built from durable, weatherproof materials to an IP65 rating, the RD1100 can be used in challenging terrain, and with interchangeable wheel types and accessories, the modular design of the RD1100 allows for easy breakdown and transportation, with typical on site assembly being possible in under 2 minutes. Weighing only 22kgs, the whole system can be transported easily and without specialist equipment.

High Resolution Touch Screen - For ease of use and more visual detail, coupled with different colour palettes for optimised viewing

Ergonomic Design - Makes the RD1100 comfortable even for longer surveys 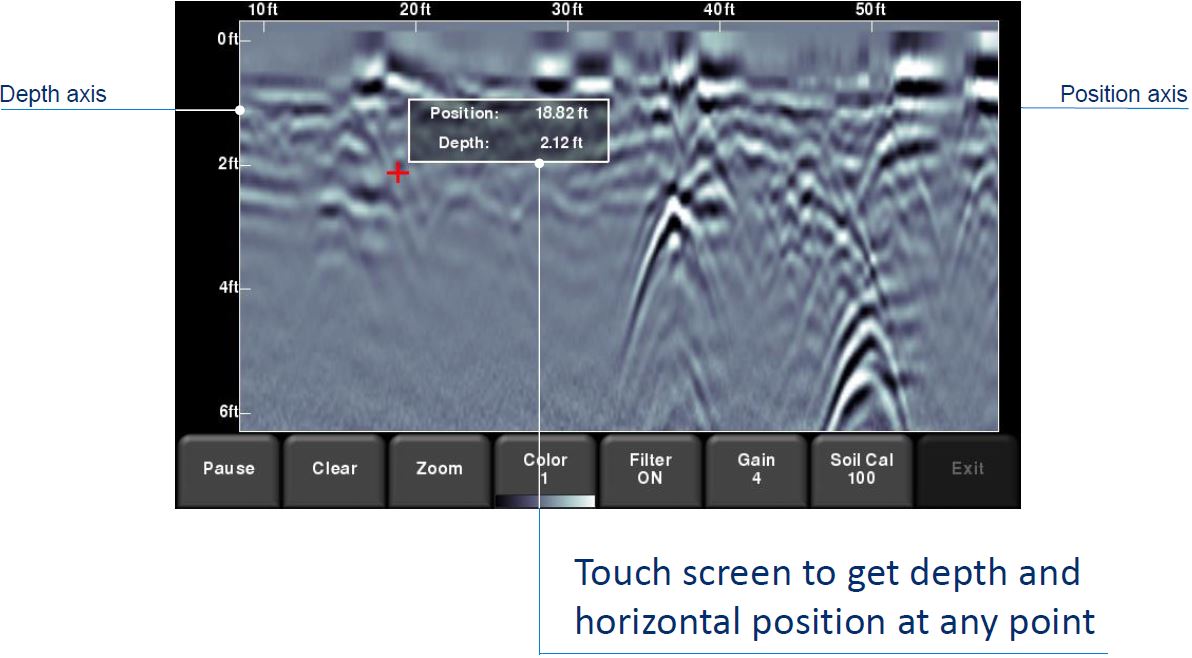 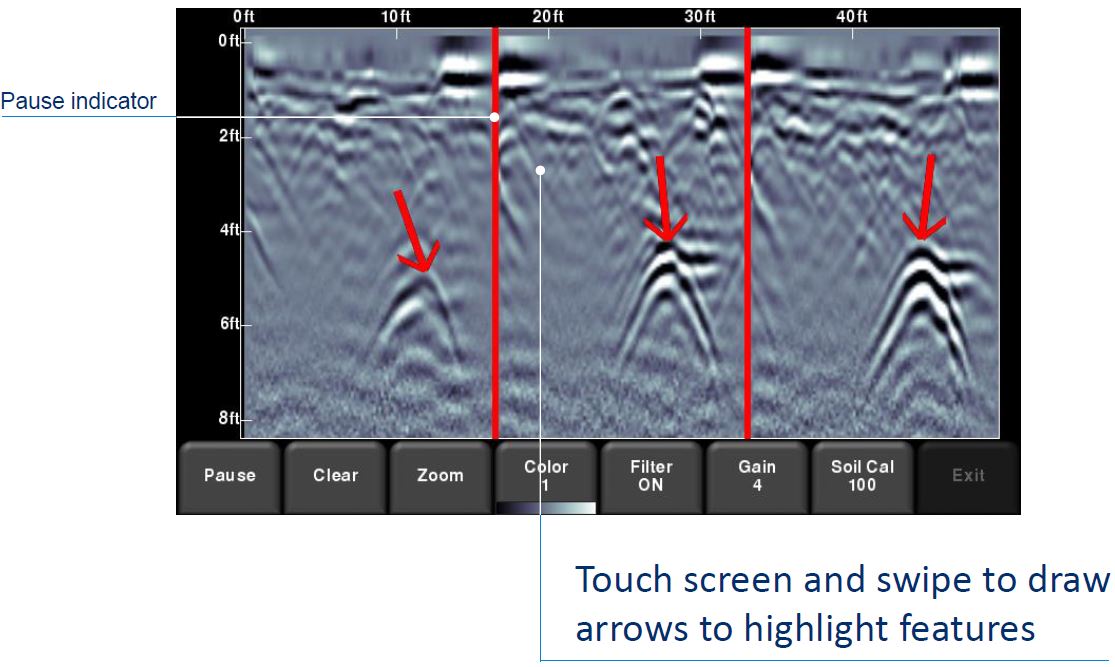 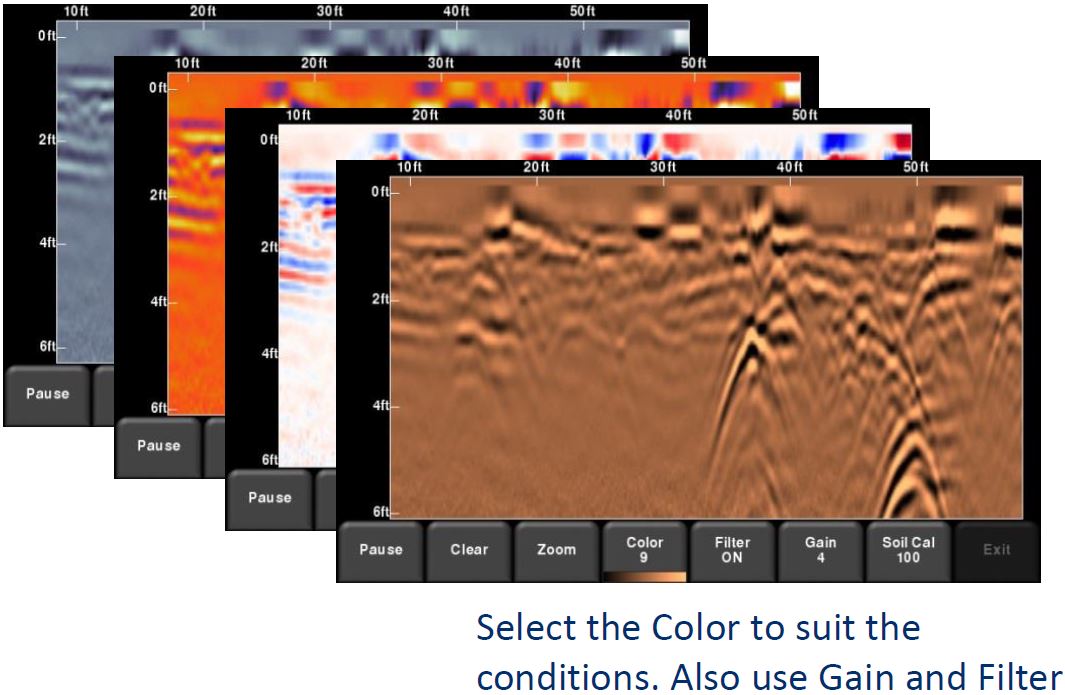 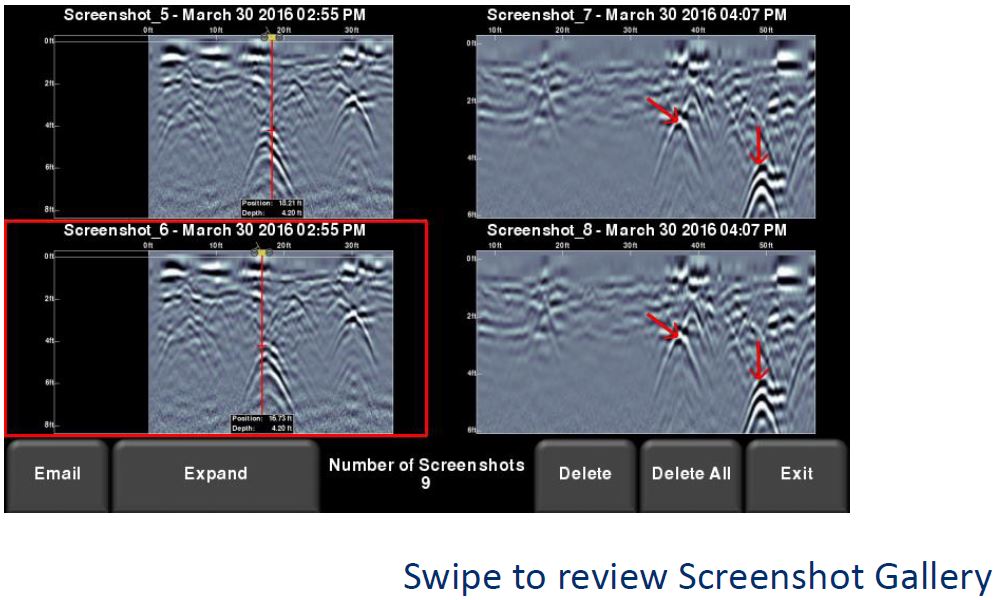 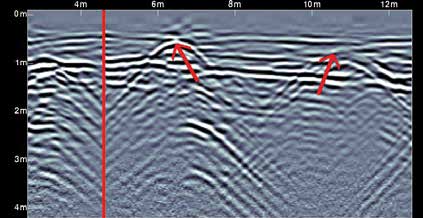 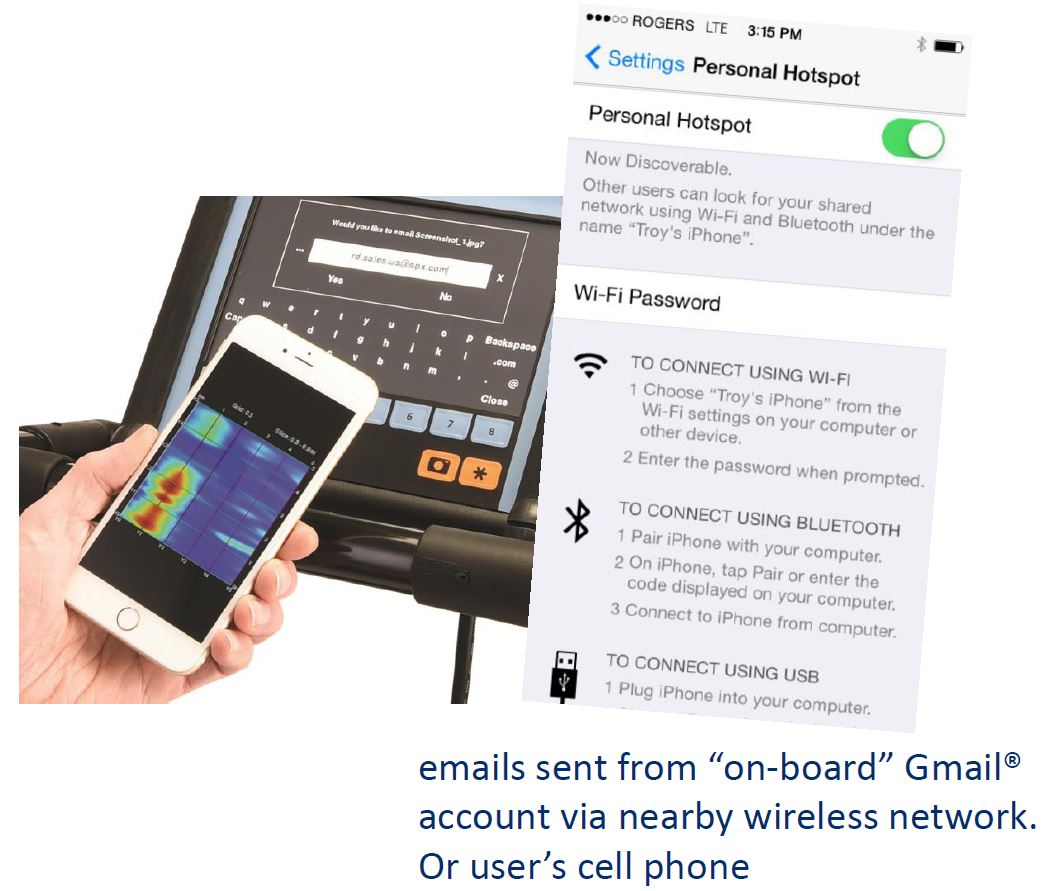 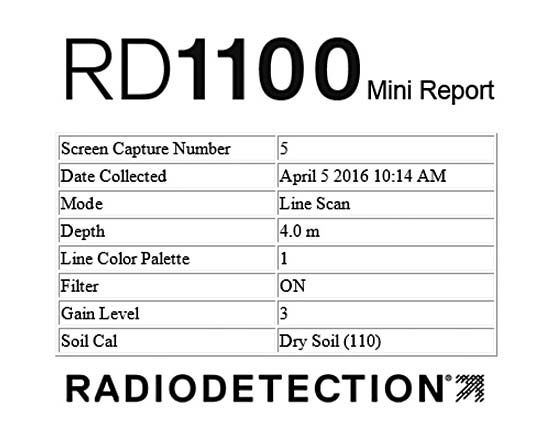 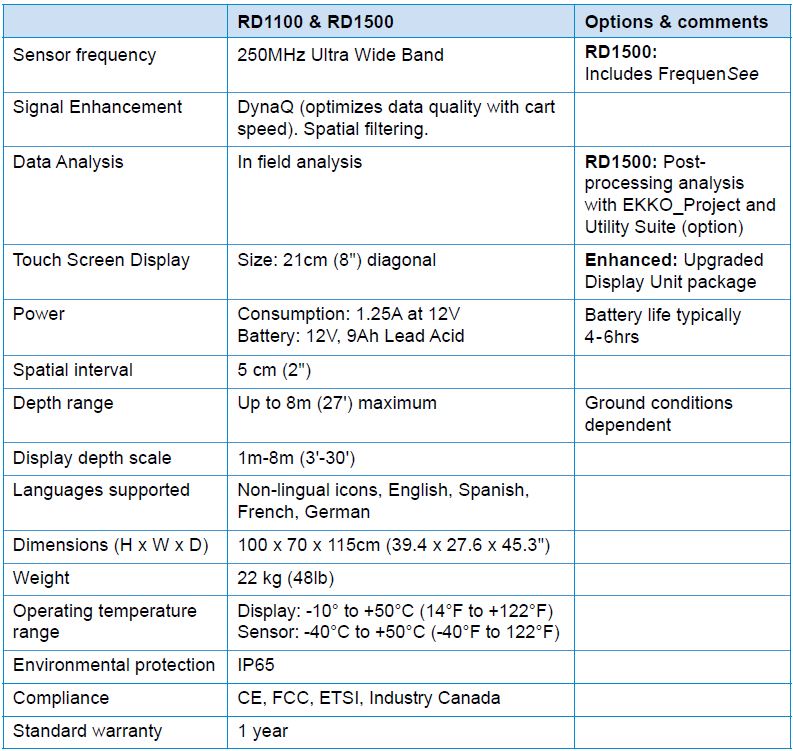 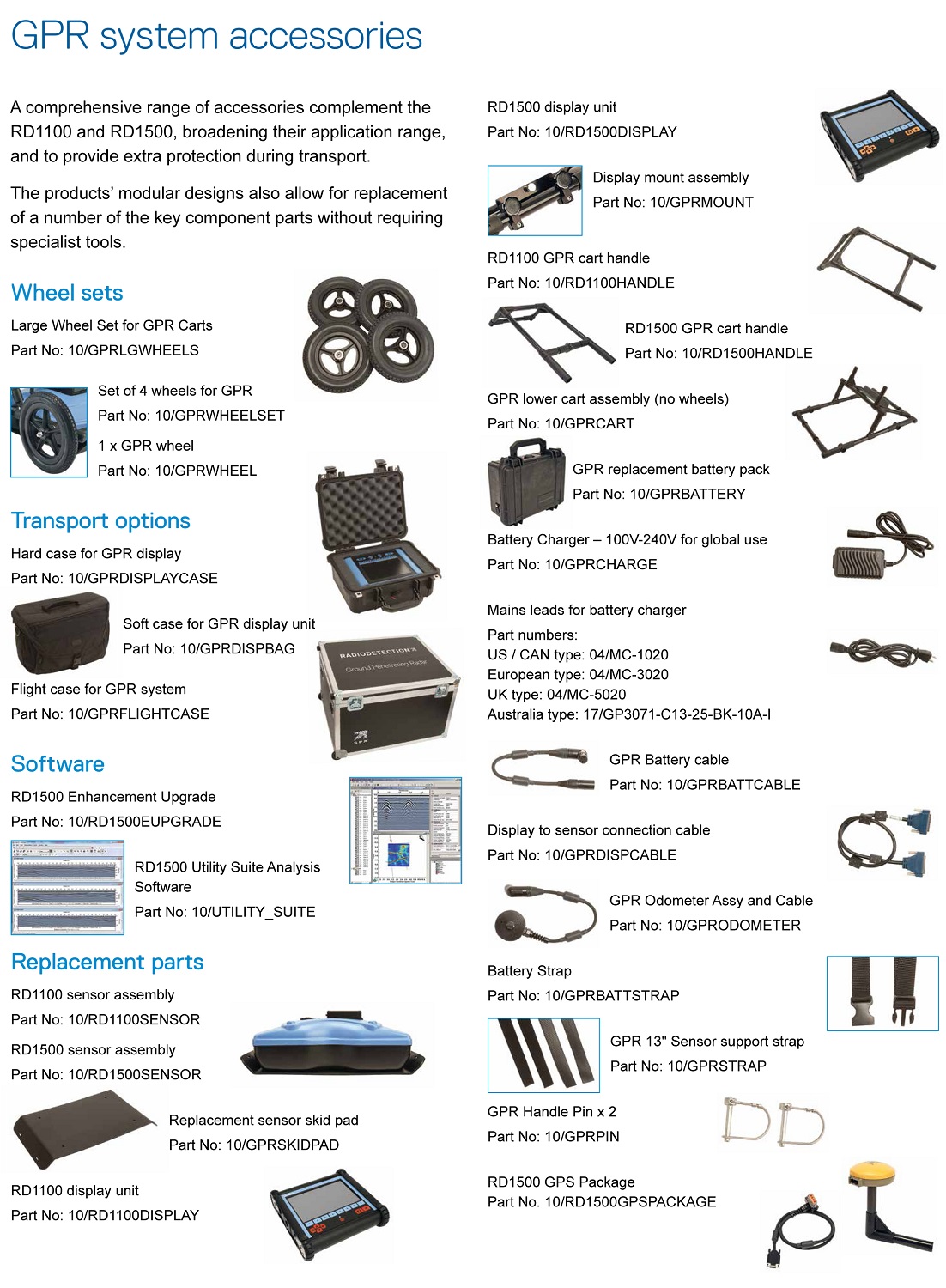