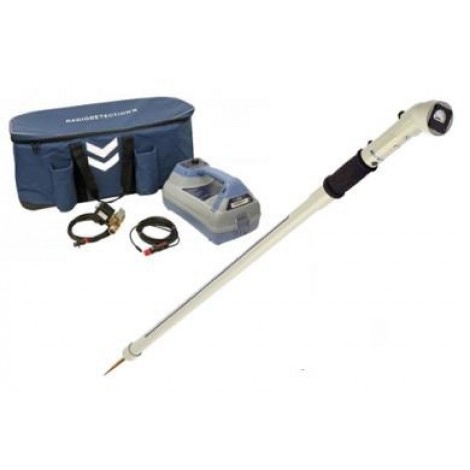 This kit is supplied with the electronic TransOnde transmitter, which contains an electronically controlled solenoid, which when switched on, opens and closes creating a pressure wave inside the pipe, allowing it to be located by using the receiver to locate the position of the pipe, by using seismic technology to obtain a visual response as well as an audible signal which can be listened to via a set of plugged in headphones. The electronic TransOnde can be connected to a water tap as long as it is connected to the water mains, either inside or outside, and it is therefore suitable for lower pressure domestic water supplies up to 400 kPa.

The RD500 can locate pipes down to 2 metres in depth, and works best with single pipes buried in soil, but can also be used with pipes buried underneath concrete or pavement, although performance may be reduced. Where there is suitable water pressure and with adequate flow, the receiver is capable of tracing pipes over distances of up to 150 metres.

Supplied as a kit, the RD500 consists of the hand held receiver and an electronic TransOnde transmitter. The electronicTransOnde is easily installed and can be fitted to an inside or outside tap for fast and easy deployment on site.