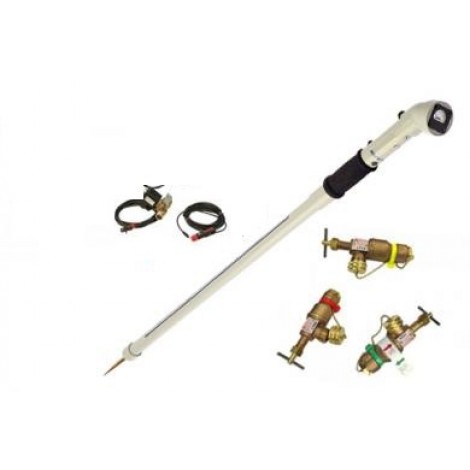 The RD500 CW plastic water pipe locator kit from Radiodetection makes it possible to locate and trace buried plastic (such as PVC) and concrete water pipes which may be under mains pressure, meaning that they cannot be located by using a traditional electromagnetic locator. The RD500 can trace buried plastic water pipes over distances of up to 150 metres from the point of the transmitter connection and allows simple location of buried water pipes in just a few minutes.

Using a TransOnde transmitter, which is connected to a hydrant, meter base or tap and a hand held receiver, the TransOnde applies a pressure wave signal into the pipe, which is then located by the sensor in the receiver, which uses seismic technology and then amplifies the signal to provide a visual response on the receiver, or via plugged in headphones.

The RD500 can locate pipes down to 2 metres in depth, and works best with single pipes buried in soil, but can also be used with pipes buried underneath concrete or pavement, although performance may be reduced. At water pressures of between 300 and 1,000 kPa with adequate flow, the receiver is capable of tracing pipes over distances of up to 150 metres.

Supplied as a kit, the RD500 consists of the hand held receiver and a TransOnde transmitter. The TransOnde is manufactured from a heavy duty brass casting, and a 3/4 inch BSP input is fitted to an open tap, meter or hydrant.