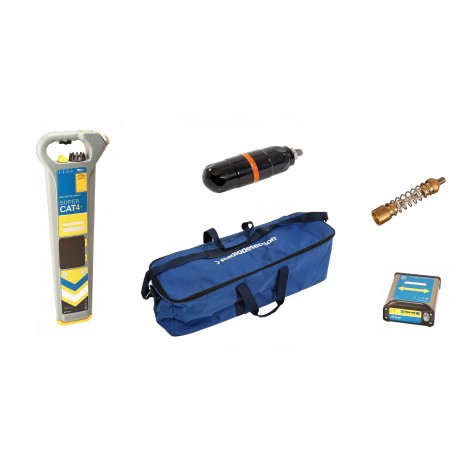 Featuring the new Radiodetection SuperCAT4+, the Plumber's Kit is specifically designed for locating water and drain pipes. The kit includes a SuperCAT4+ locator, a T1-640 transmitter, a standard sonde, a M10 spring and a soft carry bag.

The Plumber's Kit consists of the SuperCAT4+, which can utilise a comprehensive set of active frequencies, in order to detect and trace different cable types, in variety of environmental conditions. Featuring Dynamic Overload Protection, StrikeAlert and TruDepth technology, the SuperCAT4+ allows the user to accurately detect services in a safe and efficient manner.

Built for on-site use, the SuperCAT4+ is designed with lightweight, ABS casing and is rated to IP54 for all-weather operation. The SuperCAT4+ features a high-contrast display with auto-backlight and bargraph, allowing the user to zone in on the buried service. In addition, the SuperCAT4+ is battery powered, has a loud speaker for audible warnings and is capable of sensitivity control.

The SuperCAT4+ can be operated using a simple mode selection, which can be chosen based on the signal type being located. The two main modes on the SuperCAT4+ are the power mode and the radio mode. As the name suggest, power mode is utilised to detect electromagnetic fields generated by loaded power cables. Power mode also features StrikeAlert, which warns the user of shallow buried utilities. Radio mode, on the other hand, is applied to detect long range radio signals, which can be radiated along dead or non-current carrying services such as buried metallic cables and pipes. 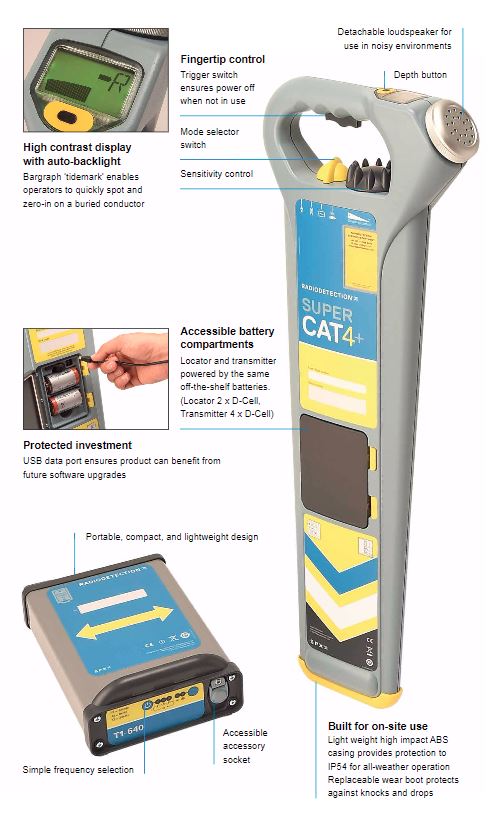 As well as StrikeAlert, the SuperCAT4+ comes with a range of features, designed for safe work practices. One such feature is Dynamic Overload Protection filters, which enables the user to filter out high levels of electrical interference, as found around substations and near high-voltage transmission cables. TruDepth technology is also present on this model, which only indicates depth when the locator is oriented correctly above the target cable, pipe or sonde, and thus, aids in providing the most accurate depth reading. Real Sound  is another feature of this particular model, in which the audio signals emitted by the SuperCAT4+ are derived from the signals detected. Radio and Power Mode signals can be easily distinguished from each other and from background noise, helping to identify target utilities and differentiating between co-located utilities.

The Plumber's Kit pairs the SuperCAT4+ with a Radiodetection T1-640 transmitter which features three active frequencies; 640Hz, 8kHz and 33kHz. The lower 640Hz frequency is ideal for locating lower resistance cables such as power cables. The higher 33kHz frequency is optimized for induction methods and for tracing insulated pipe joints and higher impedance cables. Lastly, the 8kHz frequency offers a compromise between the two and is used for general locating of metal pipes and standard electrical cables. 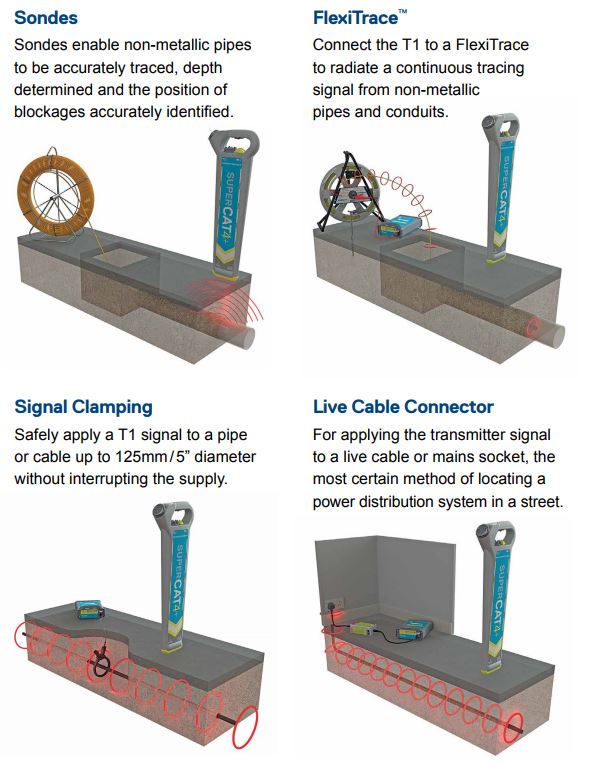 Also included in the kit is a standard sonde and M10 spring. The standard sonde is available in either the 8kHz or 33kHz sonde frequencies and can be connected to a flexi-trace rod to trace non-metallic pipes and ducting. By pairing a sonde with the SuperCAT4+, depth readings can be provided to a greater degree of accuracy. The supplied M10 spring can also be coupled to the flexi-trace rod and sonde, to aid in the navigation of pipes and bends.

SuperCAT4+ Sheet (3.30 MB)
Similar Products
x
Price:
Actual Price:
Our price is lower than the manufacturer's "minimum advertised price." As a result, we cannot show you the price in catalog or the product page.