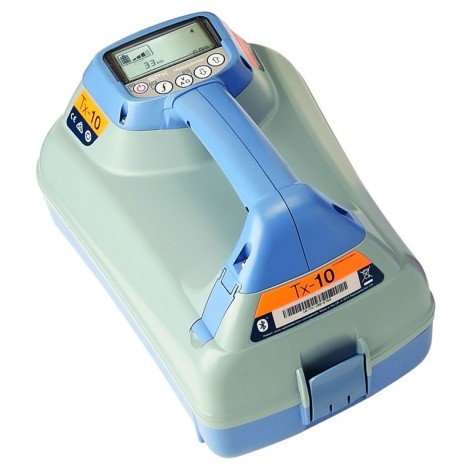 All models feature a three-stage phase sensitive amplifier that delivers a constant current across its entire bandwidth in direct connect, clamp or inductive modes.
The TX range is designed to deliver superior performance using minimal power consumption in a light weight and well-balanced, format. The transmitters are light-weight (2.9kg), well-balanced and IP54 rated to cope with demanding environmental conditions. Each model has a removable accessory tray and a weatherproof battery compartment. A large, high contrast, backlit LCD screen provides the user with clear information.

The TX-10B has the highest power capability of Radiodetection's signal transmitters. The TX-10B features Fault Find as standard, and the TX-5B and TX-10B have Bluetooth capability, which allows for remote control by a suitable locator. Fault find, as is found on this transmitter allows the user to couple the transmitter to an A-Frame in order to facilitate the location of current leakage faults in cables and pipe coatings, which indicate an insulation fault. With the A-Frame attachment, these faults can be pinpointed to an accuracy of up to 10cms with a suitable locator. The Radiodetection TX-10B also permits the use of more current direction frequencies than the standard TX-10, making it more versatile on a wider range of buried utilities, and it is suitable to use with any of the RD8100 and RD8000 ranges which have CD (current direction) as a feature.

Applying a locate signal is possible by either direct connection, utilising a signal clamp or by wireless induction, by placing the transmitter on the ground over the buried service

Please note that images may be of other transmitters in the TX family.