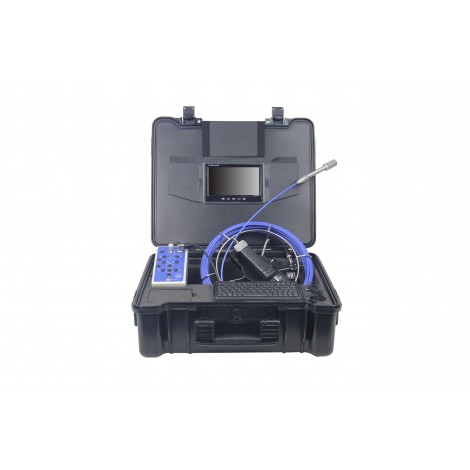 The latest Testrix drain camera systems encompass high definition technology for making inspections of drains, pipes and sewers clearer than ever before. The TX-30HDS builds on the features which have made the range of Testrix inspection cameras so popular, and adds a newly designed camera and DVR to capture video footage and still images in high definition, bringing out detail in unprecedented clarity.

The TX-30HDS is a fully self-contained video inspection system, housed in a rugged ABS field case, which is made from the latest industrial grade polymers, and engineered to be taken to the job site easily and deployed by a single person very quickly. CCTV inspections of drains, sewers, storm water pipes, as well as a wide range of other ducts and pipes are now easier than ever, and with the latest HD equipment, the level of video and imaging quality for a system of this size and cost has been revolutionised.

Manufactured from PVC coated fibreglass, the camera cable is a single piece, 30 metre long push rod and is 5mm in diameter, which is thick enough to retain a certain level of stiffness required to push the camera head along greater distances, with an optimum level of flexibility, in order to navigate a wider range of bends in underground pipes and other suitable applications.

The 23mm camera head is also re-designed and is manufactured from high grade stainless steel, which is both hard wearing, and rust resistant. A longer spring is fitted to the camera head for greater flexibility, and the whole assembly is IP68 rated, which makes it fully dust proof and waterproof from submersion. The sensor is protected by a sapphire glass cover, which offers far greater scratch resistance than the cheaper mineral glass found on some systems, and a total of 12 bright LED lights allow for illumination inside dark pipes and voids. These LED'a are fully adjustable from the control unit, to allow the correct level of lighting for various conditions. This is a high definition (HD) camera head and provides more detailed video and imaging than standard definition cameras. To complete the camera, a 512Hz transmitting sonde is fitted, which allows the camera position and depth to be identified from the surface with an appropriate locator. The benefit of the sonde is that the operator can quickly find and expose the section of damaged or blocked pipe without having to excavate whole sections of buried pipe, minimising the risk of damage or injury. We purposefully choose a lower sonde frequency, as it allows use in a much wider range of pipe materials, including cast iron, and minimises the risk of the signal coupling onto other underground services.

A 7 inch HD colour TFT display is built into the control unit for viewing live HD footage from the CCTV inspection as well as controlling the system's functions through the on screen menu, which also includes one touch video recording and image capture to either SD card, or USB memory stick. During an inspection, the screen will display the time and date, memory status, recording status, and distance to the camera head. This information can be embedded into the video and images, or with the flick of a switch, the on screen information can be hidden from view. A QWERTY keyboard is also added to this system for insertion of text comments and notes, which can also be done during a recording in real time. Our DVR controller has also been upgraded to a newer design, and also incorporates a customised firmware for improved operation. The system is powered by an extended capacity, built in Li-Ion rechargeable battery, which can give up to 7 hours run time from a single charge. When not in use, the cable reel can be stowed away inside the control case for added protection.

TX 30HDS (1.58 MB)
Similar Products
Upsell Products
x
Price:
Actual Price:
Our price is lower than the manufacturer's "minimum advertised price." As a result, we cannot show you the price in catalog or the product page.