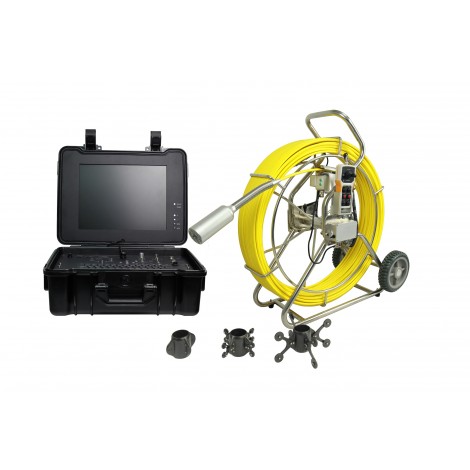 The TX-60MF from Testrix Systems offers the versatility of a manual focus camera, which allows the operator to have ultimate control of the camera's video and still footage. This system can be supplied as a single camera set up, or as a dual camera set up with a second pan and tilt camera head, for the ultimate in pipe inspection systems. Suitable for undertaking video CCTV inspections in larger pipes, sewers and drains, the Testrix TX-60MF is an industrial level system with a multitude of features and functionality, built for professional users.

The latest 50mm self-levelling, manual focus camera head is at the heart of the TX-60MF, offering unprecedented control in allowing the camera operator to focus onto target objects, and problems from as close as 20mm out to infinity. This translates to the ability to bring objects which may be out of the focusing distance of fixed focus cameras into sharp focus for advanced analysis. In some cases, it may not be possible to get the camera close enough to a potential problem, or area of interest, but the manual focus overcomes this, and allows the operator to focus on objects which are further away, AND also allows a zoom of up to 10x to be used for the purpose of revealing fine detail. The camera head is built from industrial grade alloys for weight reduction and increased protection, and is fitted with a sapphire glass lens cover. Sapphire glass is much harder wearing than the cheaper mineral glass found in many systems, and offers far greater resistance from scratching and other damage. Six bright LED lights, which are adjustable from the control box are used for illumination of dark areas, and the Sony CCD camera sensor also offers improved low light performance over many cheaper CMOS based camera heads. The camera head is self levelling and is also supplied with a 512Hz sonde, which emits a continuous radio signal when the system is switched on, allowing it's position and depth to be located from the surface.

For those who want even more versatility, a second pan ant tilt camera head can be specified. This is also a 50mm diameter camera head, and is fully interchangeable with the manual focus head, but offers control of the camera's position, by allowing full pan and tilt rotation in 2 planes, allowing inspection of objects and detail at any position forward, left right, up and down, or any combination of these. The pan and tilt camera head is suitable for inspection of larger pipes and voids, and is fitted with 4 high powered LED lights, at 60W each (instead of the standard 15W LED's). Like all Testrix camera heads, the lighting is fully adjustable from the control box, to take account of different pipe sizes, which makes the TX-60MF suitable for inspection of pipes up to 400mm in diameter (recommended to be used in straight pipes of 60mm or more). The pan and tilt camera head is also fitted with a 512Hz sonde, for location of position and depth from the surface. The benefit of the sonde is a reduction in the need to trench out larger sections of pipe, as knowing the precise location and depth enables only the relevant section of pipe to be exposed for repair or replacement. The lower 512Hz frequency allows tracing in a wide range of pipe materials, such as cast iron and minimises the risk of the radio signal coupling onto other close by buried services, which could affect the position of the locate signal.

A 60 metre long push rod cable, manufactured from fibreglass, coated with waterproof PVC is installed onto a stainless steel reel for easier transport and deployment, and to ensure that the push rod is able to propel the camera head over usable distances, the diameter of the push rod has been increased to the thickest available 9mm in diameter. The reel also has a built in distance counter, which can display the deployed cable distance on screen, and a cable brake for precise cable speed on and off the reel. This camera system can be made in longer lengths of push rod cable, up to 140 metres on request for clients, who make require a custom system.

the control box is manufactured from engineering grade polymers for a very robust and hard wearing protection from the elements. The largest 15 inch flat panel colour TFT monitor is integrated into the inside of the box, allowing the operator to see video footage in real time. This footage can be recorded onto either a SD card or USB for later viewing on the screen, or for transferring and/or saving to a PC to be sent to clients as part of an inspection survey. Virtually all system functionality is controlled from the head unit, including lighting, video and still image recording, on screen menus, and text input from the included waterproof QWERTY keyboard. As standard, the system is supplied with a hand held pendant controller to give the user hand held control over the camera functions, such as focus and pan and tilt.

A built in rechargeable Li-Ion battery gives around 4 hours of run time from a single charge, or mains power can be utilised where convenient to power the system.

Testrix TX 60MF Datasheet (1.46 MB)
Similar Products
Upsell Products
x
Price:
Actual Price:
Our price is lower than the manufacturer's "minimum advertised price." As a result, we cannot show you the price in catalog or the product page.