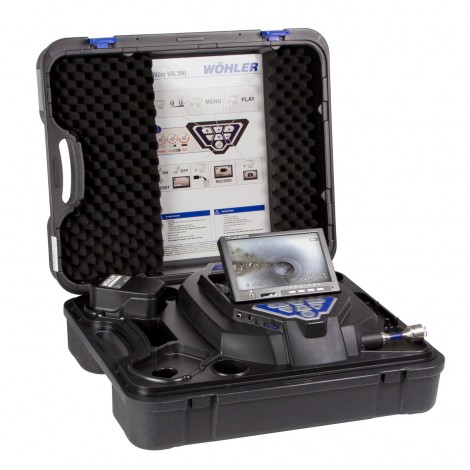 Wöhler‘s VIS 250 service camera is known for its ability to precisely inspect for damage or blockages in pipes of Ø 40 mm or larger, and this can be done without the need of a mains power supply as the Wohler VIS250 can work on its rechargeable battery. It can carry out inspections for up to 4 hours (requires second optional battery) and has slot for 2 rechargeable batteries. Its design is compact and the whole camera set comes in a hard and rugged field case which makes it easy to carry around with a high level of mobility.

As well as being compact, and self-contained due to it’s rechargeable battery, the camera head comes with a powerful, integrated light which allows you to analyse damage in waste water pipes (at least Ø 40 mm), inspect storm water fittings and pipes as well as flue gas lines with both speed and precision. This enables you to assess the damage or problem quickly and effectively.

Wöhler‘s VIS 250 can provide on the spot video footage and imaging allowing hidden defects to be exposed for competent analysis of pipes and plumbing in various types of applications and provide the user with transparent on-the-spot damage diagnostics.

Thanks to its user-friendly handling and fast start-up, the user can be confident in deploying the camera quickly and without fuss. It is also easy to fully document the inspection work with the integrated video memory feature. With a single touch of the button, the camera saves the video of the camera head travelling through the pipe, and also allows for instant still image capture and stores it on its 4GB SD memory card. It can even pass several right-angle bends without problem. The camera head is rated IP68, rated to 30 meters, for the maximum 30 minutes.

The distance of the camera head along with its position is displayed on the screen. This comes in handy while analysing pipe gradients. The display always shows where the top and the bottom of the pipe or duct is. The user can also see the exact angular direction in which the camera head is pushed, i.e. upwards or downwards.

Wöhler’s VIS 250 has some additional features as compared to Wöhler VIS 200. Wöhler’s VIS 250 has video setting features that enables video recording and clicking of photos. Videos can be fast forwarded and rewound on the large colour display, and the camera lighting system is dimmable, giving the user the ability to obtain much clearer views by control of the amount of light being output, which can be matched to the conditions being encountered.

VIS 200 And VIS 250 Datasheet (2.11 MB)
x
Price:
Actual Price:
Our price is lower than the manufacturer's "minimum advertised price." As a result, we cannot show you the price in catalog or the product page.