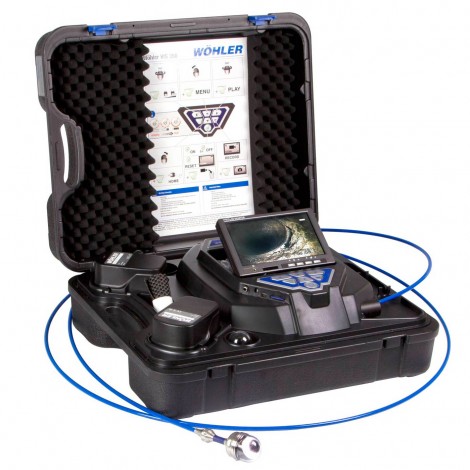 Wöhler‘s VIS 300 pipe inspection service camera offers a mini 40mm diameter pan and tilt camera head with a built in transmitting sonde, housed in a self-contained ABS field case for fast and easy deployment into pipes of Ø 70 mm or larger, and also works on a rechargeable battery requiring no additional mains power supply. The VIS 300 is a fully equipped, portable solution designed for making video inspections simple and no fuss.

The camera head is a revolutionary design and offers a mini pan and tilt solution, meaning that the camera head can be panned around through 360° and tilted 180° meaning that even the smallest damage is not hidden from view. LED lighting is built into the camera head for illuminating the surrounding area and producing a bright colour image on the tiltable 7 inch display, which can also be removed. CCS (Crystal Clear Screen) technology ensures that the user has the best possible imaging for analysis of even smaller or difficult to see detail.

Wöhler‘s VIS 300  can boot up instantly for on-the-spot damage diagnostics in real time, and the camera has an IP67 rating, which means that it can be temporarily submerged for undertaking inspections in flooded areas of pipe which may be underwater. A distance counter lets the user see the distance travelled by the camera on the display, which can aid pinpointing of the camera head. Additionally, the built in transmitting sonde allows the location of the camera to be accurately ascertained with the Wohler L200 locator.