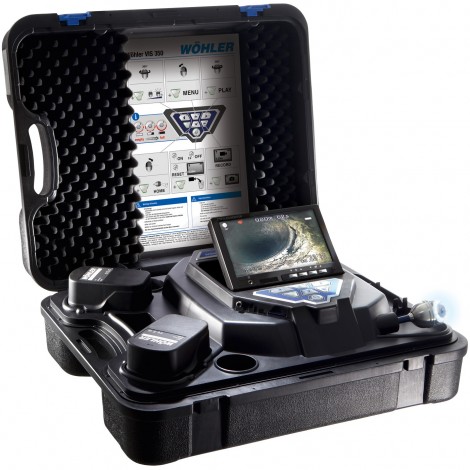 The Wohler VIS 350 PLUS video inspection camera lends itself to a wider range of applications, thanks to it’s detachable and interchangeable camera heads, which allows for greater flexibility than a single camera system, especially when undertaking inspections of different sizes of pipes and equipment. The VIS 350 PLUS enables you to easily inspect and analyse damage or blockages to waste and storm water pipes, sewer pipes and systems, plumbing connections and flue gas systems, but the possibilities are far and wide and the VIS 350 can be used for many more applications where video inspection of pipes of over 40mm in diameter, or cavities is required.

The fully equipped and portable VIS 350 PLUS inspection camera set comes in a rigid field case, with the mini 40mm pan and tilt camera head, which is both fully detachable and interchangeable, making it easy to transport to site and deploy quickly and with the minimum amount of effort. This makes it possible to add a second 26mm standard camera head later for extra flexibility to inspect, analyse and report.

The mini pan and tilt camera head is a new, innovative design and offers a small 40mm pan and tilt solution, meaning that the camera head can be panned around through 360° and tilted 180° meaning that even the smallest damage is not hidden from view. The camera head has LED lighting is built in for illuminating the surrounding area and producing a bright colour image on the tiltable 7-inch display, which can also be removed. CCS (Crystal Clear Screen) technology ensures that the user has the best possible imaging for analysis of even smaller or difficult to see detail.

Along with competently analysing hidden defects in all types of buildings, the Wöhler VIS 350 PLUS also provides a transparent on-the-spot damage diagnostic. With instant start-up and a host of user-friendly features, the VIS 350 can be deployed on the spot for instant analysis of pipe blockages or damage and the built-in memory allows video recordings and still images to be saved for documenting the inspection for clients. With the Wohler VIS 350 PLUS, a video of the camera head travelling through the pipe in real time can be saved, and due to the camera’s size and flexibility, it can pass through bends relatively easily. An IP67 rating allows the VIS 350 PLUS to be used in wet areas, where temporary submersion of the camera head is likely, such as flooded sections of pipe.

Building on the specification of the VIS 350, the VIS 350 PLUS also has an auto levelling pan and tilt function, which is achieved by pressing the Home button to automatically align the camera head to a straight, forward facing position, and both on-screen distance as well as the camera’s level and angular movement are also displayed on the monitor, which is useful in showing the gradient of the pipe in which the camera head is located. The distance counter, along with the built in transmitting sonde allows the position of the camera head to be pinpointed using the Wohler L200 locator, which is invaluable for targeting the precise location of a blockage or damaged pipe.